Finishing up the trail was a bit of a whirlwind. The last few days the group of 5 I was hiking with decided to push hard to finish by November 20th. That meant that we had to hike three consecutive 20 mile days and then two 15 mile days to the end. As I walked the last 15 miles I was thinking a lot about the Northbound hikers who would soon be leaving on their trek to Maine. When I started out my hike the first few days felt so long and tough, but lately everything felt so easy. I could just imagine what the North bounders would be thinking about the first few mountains, the terrain and the water sources, as far as we were concerned, they have a really easy start to their hike compared not only to the 100 mile wilderness, but also compared to the rest of the trail.

I had decided early on that I would try to stay focused on today rather than tomorrow to help the time pass more quickly. It made my day feel longer and more difficult if I was constantly looking at how many miles I had left until the end, or what giant mountain was coming up tomorrow. North bounders would tell us that Springer Mountain was a let-down because it isn’t much of a climb, more of an ant hill. I ignored them because I didn’t want anything else to get my spirits down on this hike.

When we arrived at Springer Mountain a few of my friends parents were there to greet us. The last one mile on the trail felt pretty surreal. I could hardly believe that I was moments away from finishing the entire length of the Appalachian trail. At the top we celebrated with hugs, champagne and pictures. It was near dusk when we got to the summit and the sun was starting to set. The view was beautiful, the company was great, and we were all elated to have finally made it.

I’ve been home a week now, and it hasn’t quite sunk in yet that I have just hiked the entire Appalachian Trail. 2180 miles! I know it seems crazy to think about attempting it, but while I was on the trail it just felt like one step after another, slow, painful and thoughtful steps. 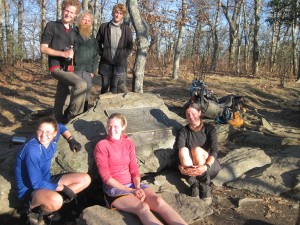 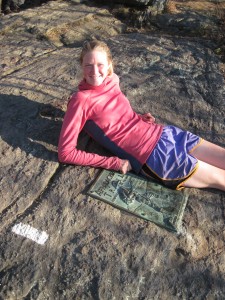 beside the plaque and the final white blaze